The most hotly-debated topic on the Internet is... 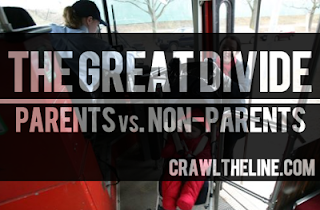 I read this entry on Huffington Post written by a dad giving advice to parents about what NOT to say to non-parents (or the childless or the child-free or DINKS.) I thought the article made some good points and it was refreshing to hear from a parent who was sensitive to the fact that relationships between parents and non-parents can be strengthened by a little empathy and understanding on both sides.

Of course articles like this almost always incite a comments war.  The decision to have children (or not) seems to rile people up like no other subject--except maybe politics, race, or religion. There are people on both sides of the issue who seem to feel that their decision is the only valid one. Ignorance of the other side is rampant. Some over-zealous parents (usually mothers, but sometimes dads) feel the need to defend parenthood as the most self-sacrificing and meaningful decision an adult can make. They accuse the child-free of being selfish and immature and put fear in their hearts about missing out on life and growing old and lonely. Meanwhile, defensive non-parents accuse parents of being egomaniacs who are just looking to replicate their wonderful genes. Or that parents are pod people who can only talk about their children's accomplishments. Of course the fact that these non-parents owe their existence to their own self-sacrificing "pod parents" is rarely mentioned. I've read comments from both perspectives that I hope have never been aired out loud because they're so petty and mean. These are comments that lack empathy and would end most friendships.

As a non-parent in the minority, let me share my experience thusfar. All of my friends who are around the same age as me have children now. One of my friends is delivering this week, in fact. It has been an adjustment getting used to the idea that my friends have a different focus now--perhaps even more so for me because most of my friends waited to have kids until their late thirties so I'm accustomed to thinking of them without kids. I won't lie--it can be lonely sometimes to be the only one without children. While they're adjusting to life with a baby on their hip, I'm fighting a chip on my shoulder. I worry, do they think I'm weird? Do they judge me? Will they want to stay friends? How involved do they want me to be with their kids? Is it OK if I want to occasionally spend some "girl time" with them that doesn't include their children, or should I consider it a package deal from now on?

Most of these questions were resolved fairly early on between me and my girlfriends, which makes me feel lucky to have chosen wisely in the friend department. The women who know me best appreciate me for who I am and aren't looking for another friend to trade diaper jokes with--they have enough of those, thank you. There was one incidence when a friend of mine mentioned that having her son gave her a reason to wake up in the morning, and I recall feeling stung at first. Was she intimating that I, by contrast, did not have a reason to wake up? But I caught myself before upchucking my insecurity all over her. She was sharing her joy at being a mom, a joy that she didn't realize she could feel. It had nothing to do with me. It's not always about me, and if I want to be a good friend I need to keep that in mind.

There are times when I'm around my friends when I feel like the only stories I have to share when relating to their parenting challenges are stories about my own childhood.

"Lizzy insists on sleeping in your bed? I used to drag a sleeping bag and sleep in the hall outside of my parents' bedroom. I'm sure that must have gotten old PDQ!"

There is also the effort of trying to avoid comparing my dog to their child. In fact, I'm super-aware of falling into that trap, especially since my dog shares a lot of the tendencies of an infant or toddler: namely copious outputs of poo to which I must attend, needy barks I must answer, and the desire to press my face close to hers and sniff her little head because I love her so much. I do not refer to myself as "Mommy" to Carmelita, or at least not in any parents' earshot.

Ultimately my feeling about having kids versus not having them has evolved into this: both decisions, like any other choice in life, come with benefits and drawbacks. We can't even predict what they might be before they happen. Some parents are able to balance having children with doing pretty much everything they did before having kids. Some non-parents who thought they would have a lot of extra money to travel the world and stay at four-star hotels are realizing that in this day and age the cost of living is expensive without kids and exorbitant with them. Whatever choice you make (or whatever happens to you even if you do not choose it), you will adapt to those circumstances and it will be OK. If you have kids you will love and care for them and be happy that you had them. If you don't have kids, you will appreciate your abundant time alone and your independence.

Defending our personal choices as better than someone else's is not just insulting--it's nonsensical. You never know what's going to happen in life. You might fall in love with someone who doesn't want children. You might find yourself pregnant before you think you're ready. You might be physically unable to have children. You may have one child thinking that is all you want, and then decide you really like being a parent so you have another. In the end, what does it matter if my choice is different from your choice? That's life. That's what makes us all interesting.