No one was here 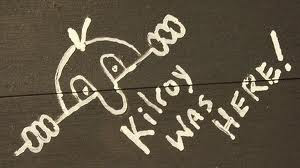 "Often, we leave rooms a bit messier than when we entered. We think, 'I'll clean it up later.' Later never comes, until the mess is unbearable, and we become irritated enough to undertake a thorough cleaning. Or we get annoyed at someone else for not doing their part in the housework. How much easier if we take care of things right away. Then we don't have to feel growing annoyance at the gathering mess."--Jan Chozen Bays, from How to Train a Wild Elephant & Other Adventures in Mindfulness

If you leave a glass on the table in my mother-in-law's kitchen, don't expect to find it when you come back. She's likely swept it up and into the dishwasher before you have a chance to reclaim it. I think she's practicing Leave No Trace.

When I worked for a brief time at the Appalachian Mountain Club, I noticed that they teach a whole program for outdoor guides about Leave No Trace. Although I never caught on to the appeal of sleeping outdoors among all manner of bugs and no running water or electricity, I did agree strongly about their Leave No Trace edict. When I see empty Michelob Lite bottles and crushed Doritos bags strewn about outdoors, I want to pick up the trash and throw it in the person's bed, preferably with him/her still in it.

But at home I find myself leaving things for that mythical tomorrow. I cook dinner, and afterward, feeling full and lethargic from a day at work and too many carbohydrates, I wander off, leaving the mess in the sink to deal with later. But waking up to a sink filled with dirty dishes is like leaving a filmy residue on the next day. Same goes for the bag of papers to file soon and the magazines to look through and recycle at some point. I have a hard time getting rid of my glossy magazines like Food and Wine and The New Yorker but at this point I have a whole periodicals section in both the living room and office, and no one looking anything up or borrowing them.

I'm slowly reading the new Jan Chozen Bays' book and in it she has an exercise called "Leave No Trace." You're supposed to choose a room and then make sure that you always leave that room in the same condition in which you found it. Like her other exercises you do this for one week. The reason I'm doing this particular exercise is that I find that my sense of self-discipline is lacking. With this flaw in mind, I told Mike what I was up to so he'd be there to nag (I mean, remind) me about it. I chose the kitchen since I like to cook and the dog is confined there during the week, and sometimes the younger cat Joey Thumbs jumps the pet gate and sniffs around for our leavings. At this point I've loved her into obesity (food = love, except when it causes Feline Diabetes) so she's not doing much jumping on the counters when we're not home. Still, starting the day with a clean sink is really a lovely feeling.

So far it's going well. Mike was inspired to take over the Leave No Trace duties this morning by washing our breakfast dishes. If you want someone to do something, it helps to lead by example.

Not that it's easy. I have to fight my urge to walk away from that pile of crumbs or that coffee cup with the lipstick print and coffee stains on it. The call of an intriguing book or Carmelita with the road kill toy in her mouth, begging me to play tug-of-war...they all have to wait until I erase my trace. The idea is not only to be a neater person, but also to appreciate the everyday objects that we use and then mindlessly leave behind. My Captain Haddock mug, the one-cup coffee press, the tiny IKEA spoon--all serve me well every morning and they deserve some props.

So many of us want to leave our trace in this world, but there's something to be said for traveling incognito, coming and going without anyone knowing you were there.