Happiness is the sum of each moment 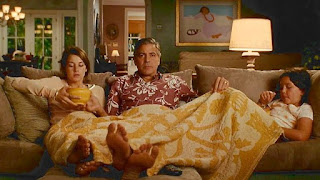 Photo still from the film The Descendants

"'Well, that's what life is — this collection of extraordinarily ordinary moments," [Alexander] Payne says. "We just need to pay attention to them all. Wake up and pay attention to how beautiful it all is.
'If you were falling in love and you could go back in time and relive a day and see the banal things you did that you'd forgotten about, you'd weep, looking at that day,' Payne says. 'Somewhat dramatic things happen, and you don't even always notice them — that's what life is.'
Those moments, unless you write them down or photograph them, drift off and away. They just go by."--From "The Extraordinary, Ordinary Life of Alexander Payne" by Susan Stamberg, via NPR.org


My husband and I were walking to Shaw's to do our regular Sunday morning grocery run.  We like to go early in the morning, both of us unshowered, in sweatshirts and sneakers, my static-prone, fine hair looking like it's lost its way and is flying in multiple directions.  Once inside the store we're relieved to see plenty of carts lined up waiting for us, carts that actually move forward when you push them rather than side to side.  The few customers who are already there are mostly loners--middle-aged men in hooded sweatshirts to hide their unshaven faces, a college student in a BU tee buying a tub of skim milk, a woman with a small child negotiating about a package of cookies.  The loudest sounds in the store come from a trio of Haitian men, likely brothers, who laugh with the gusto of people who are completely free and comfortable expressing themselves when they are together.

My husband has brought The Wizard, a pocket adding machine like the sort a 1950's housewife would use.  It's hard to tell sometimes if he really enjoys being eccentric or if he just relishes the look of bewilderment that's so frequently on my face.  Actually it doesn't have to be one or the other.

We are shopping using only cash and The Wizard will help us stick to our budget.  Of course the electronic calculators on our cell phones that we carry around anyway would do just as good a job, but that would be less fun for him.  He is a fountain pen user.  He has a collection of old-fashioned, double-edged safety razors.  He enjoys reading every plaque on every statue in the park.

Although I predict a fight over whether or not we really need to buy both a sheep's milk cheese and a cow's milk cheese, or whether it's really worth buying two boxes of premium crackers to use a $1.00 off coupon,  we actually do pretty well.  Unaccustomed to looking for the price of an item--my old style being, hey, this looks yummy, I'm throwing it in the cart before I even look for a price tag because who cares how much it costs, I want it--I find that we've spent $60 in the first aisle of the store alone.  But at least we have a cart half-filled with fresh produce and meat and cheese, rather than three kinds of jarred pasta sauce, a $20 bottle of Balsamic Vinegar, and Nutello.

In fact, in our attempt to keep under our spending limit, we skip most of the middle of the store, where the majority of the processed foods live, and pick up milk and eggs on the outer periphery.  There is a nice buzz of cooperation between us, and when we walk out of the store, me pointing out that we went $8 under budget, I know that my husband is happy, which makes me happy, and it gets better when I take the extra money and buy Monkey Bread with Caramelized Walnuts at Clear Flour bakery to have with breakfast.  At $6.75, it feels like a splurge, when normally I can't walk out of that place without spending less than $20 on heavenly carbs.

Later at the kitchen table, which is half covered with sections of the Globe, we are each tearing off pieces of the sticky bread and licking the cinnamon sugar off our fingers.  It is a MOMENT.  Nothing life-altering or euphoric, just a MOMENT when all is peaceful. My husband says, "I like Sunday breakfast with you."  Right back at you, babe.