My Spring Inspiration Board 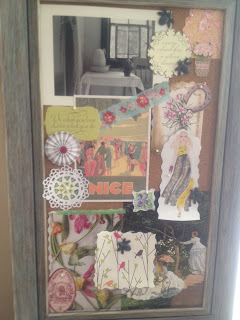 My vision of Spring
I'm not a visual artist like my mother, but I do like assembling found images, like collages and mood boards. It's very relaxing, actually. It's important when you're making a collage/inspiration board not to aim for the perfect aesthetic, but to go with whatever comes to you. I know that sounds airy-fairy, but it works. Since it's your idea of inspiration, your mood, you can't do it wrong. I like projects where I don't have to worry about the potential for failure. More of  life's tasks should be approached this way, but unfortunately we often second guess ourselves.
Posted by Jennifer Campaniolo at 1:07 PM No comments:

At least you're not Jodi Arias

It could be worse, you could be one of these two people

Whenever I feel like I've been stood up by Luck, who decided to take out another woman with longer hair and tighter abs, I reflect on those who have it worse than me. That may sound harsh, but it's not like you don't do it, too.  In fact, if you need to feel better about your situation, just keep reading this blog post.

Anyway, if you're sizing up where you fit on the social hierarchy, isn't it better to look down below you, like someone standing on a long line intermittently turning around to see the poor schmo in back of them? That's certainly preferable to focusing on the smug jerk who's way up in front of the line, who is in fact getting what he wants RIGHT NOW.

I'm unemployed, but am currently trying to establish a freelance writing career that, should my dream job materialize, I can do in my spare time for extra cute bag money. While I try to spend at least half of my day at home being productive, I find that around 1:30 or so my energy starts to lag, and I think, there isn't much that's good about this whole "no job, no money situation" so I may as well take a nap. Or eat a cookie. Or eat another cookie. Or switch over to Huffington Post to read the latest on the Jodi Arias trial.

For those of you who don't know who Jodi Arias is (and be glad if you're in that camp because it means you likely have a good job and a busier social life than me), she is the 32 year-old comely Arizona woman who murdered her boyfriend Travis Alexander and is now on trial claiming she acted in self-defense because he was abusive. I first came across the case when I saw a picture of the defendant and thought, she looks very normal--in fact she's pretty and her glasses make me think she's probably smart, too. How could this fortunate-in-the-looks-and-brains-department woman be on trial for her life?

Yes, I judge a book by its cover. That's why in publishing they should let the marketing people like me, and not the editor, choose the cover art.

So I start looking at the crime scene photos (and this case is perfect visual fodder for the web because Jodi is an amateur photographer and was snapping pictures right before she knifed the guy), juxtaposed with the happy photos of the two lovebirds in front of various cliche backgrounds, like a waterfall and a sunset. Then I watch the interrogation video where Jodi lies about the murder, claiming two intruders killed Alexander, and then when the interrogator leaves the room, decides it's time she did a headstand. Perhaps she was just attempting to get the truth to flow to her brain. And because I was now a few hours into my own personal investigation of the case, I listened to the phone conversation Jodi taped with Alexander when they were still seeing each other but not "in a relationship" (if you're a woman that probably sounds a little too familiar.)

My assessment, along with everyone else who is not on jodiariasisinnocent.com, is she's guilty. She's already established herself as a liar with the two intruders story. She later changed that to confess that she killed him, but only because he had done abusive things like swat her possessively on the derriere when he noticed other guys checking her out, and take her to a hot air balloon festival while secretly phoning another girl.  I know this guy--I have unfortunately dated this guy in my 20's--and telling him off and never seeing him again seems a much smarter alternative than setting up the shower scene from Psycho.

My fascination with the case is hard to explain. But I knew I had a problem when I started watching the trial on HLN, home of Nancy Grace-less, while folding laundry. They show a snippet of the courtroom drama, then cut away for more eye-rolling-she's-totally-guilty commentary by anchors who look like they would otherwise be forecasting the weather. A half hour of after-lunch testimony drags into rush hour.

There are people who are more engrossed (read: sadder) in this trial than me. On the Huffington Post Jodi Arias discussion board, one woman was complaining that she had "made pasta sauce, did my laundry, took a shower and got dressed, all so I would be free to watch this trial, and now they're postponing it because that Jodi wench has a migraine?  Oh boo hoo, honey. At least you're not lying in a pool of your own blood like Travis!!!!!!"

Jodi, like the rest of us, should at least be grateful for that.


Posted by Jennifer Campaniolo at 7:40 PM No comments: