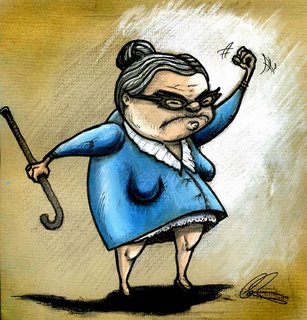 "Rather than obsessively following states of mind such as anger, fear, or grasping, states that will bring harm to ourselves and others, we can let go as though dropping a burden. We are indeed burdened by carrying around habitual unskillful reactions. As wisdom reveals to us that we don't need these reactions, we can abandon them."--Sharon Salzberg, from Lovingkindness: The Revolutionary Art of Happiness

Every town has at least one "character."  If you're in New York City, there are too many to take notice, but in Brookline there is one particular woman I'm thinking of.  She's an older lady--maybe in her 70's--with a well-coiffed head of short white hair.  She is usually trailing a rolling suitcase behind her, or she's got a very vibrant-pink-colored Jansport backback on as if she were on her way to go hiking in The Whites.

I see her walking in my neighborhood, but I've also seen her get off at the same "T" stop as me at Heinz Convention Center in Boston.  Recently, I saw her get on the train as I was heading home for the day.  She sat right next to me.  I have a thing about not looking at people for more than 1/2 second because I don't want to seem like I'm nosy or rude.  This is a problem for someone who likes to write about human nature.  I did notice she was eating old-fashioned gumdrops from a bag and that she smelled of fish.

The reason I say she's a character is that whenever I run into her, it's her voice that I hear first.

"Get out of the road, you jackass, don't you see people are crossing!"

"Hey, Buddy, slow the fu*k down!  You're going to mow someone over."

I should add that most of the time that she's yelling at traffic, she's not actually crossing the street or in the road at all. Either she's a self-appointed crossing guard for the residents of Coolidge Corner, or at one time she was the victim of a hit-and-run and now she's the vigilante of automobile safety.

I do wonder about this woman.  Most of the time when I see other people react to her, they either step aside with a worried glance or they laugh.  I understand both reactions, even though as I get older I grow more empathetic of people who stray from the norm and wince when I see them mocked.

What I wonder is, what really makes her so angry?  And is her anger only reserved for this one occasion?  She doesn't appear bedraggled enough to be chronically homeless.  Does she have a family?  Anyone who looks out for her?  Tries to get her to calm down, even smile once in a while?  Her anger--like many people's--is palpable and contagious.  If I'm around an angry person not only do my defenses go up, but my blood pressure increases and I start thinking about how satisfying it would be to tell someone off (which I rarely do because confrontation nauseates me.)

Some women fear being a bag lady when they're old, even if they are currently well-off.  But it seems just as troubling to be an angry old lady, mad at a world that has changed too much, too fast.

Or perhaps she's always been angry and never learned how to manage it, and so now her anger is magnified, making her into less of a character and more of a caricature of the curmudgeonly old woman.

It seems to me that if I want to grow into a happy old woman, now is the time for me to learn how to let things go.
Posted by Jennifer Campaniolo at 2:18 PM No comments: