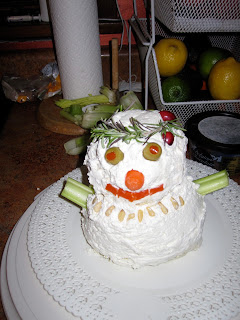 Photo: The "cheesy" snowman appetizer I made on New Year's Eve, from an idea I found on Pinterest


"The greatest mistake you can make in life is to be continually fearing you will make one."--Elbert G. Huddard

Last spring I started a family recipe binder.  I bought a stack of clear insert sheets, and divided them by categories like "Eggs and cheese," "Shrimp and meat" (shrimp is the only fish I can stomach), "Vegetarian" (that section is the thickest because Mike is a veggie and a good guinea pig for my cooking lessons). The rule is my family recipe binder can only include dishes I have made and liked (or that would be good with some minor tweaks).  On each one I write the date and make notes about the process and results ("Make this one when tomatoes are in season" or "Mike LOVED it but it gave him gas").

The recipes themselves are from all over--stained index cards in my mother's handwriting for dishes I remember having as a kid, like Lentil Stew and Chicken Cacciotore, which she wrote out for me before I left home.  My own writing on torn notebook paper, some sheets dating back to my college years when I used to go to the library and copy down recipes from hardcover cookbooks I couldn't afford to buy.  Lots of pages ripped from magazines, dating back to 1994, when my job at the University Bookstore included managing the magazine rack. When a new issue came in, I was to pull the old one off the shelf and rip the cover off in order to mail the unsold covers to the distributor.  I'd take topless copies of Eating Well and Food & Wine back to my dorm room, ripping out recipes I planned to follow once I had more than a hot plate and one aluminum pot. 
Back then I was eager to have my own kitchen because cooking dinner was something very adult and sophisticated.  I didn't see it as domestic drudgery, like cleaning the toilet and washing the windows.  Cooking was dinner parties, family meals around the table, creating new tastes and experimenting, sharing my love of food with my guests or partner. 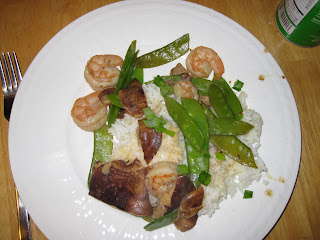 What I love about cooking (and baking, although that tends to be a more exact science) is that I generally don't worry about making a mistake.  It's one of the few areas of my life where it doesn't bother me if I screw up a step because I usually find a way to fix it so the dish is still edible, or even unaffected.  I think it's this kitchen confidence that keeps me from second-guessing myself.  Cooking and baking are fun, they're creative, and you usually get an end result that makes people happy. 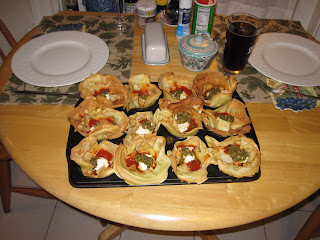 I find that unless I've had a particularly tiring day, even cooking on weekdays can end things on a good note.  Yes, it means laundry has to wait until tomorrow night and maybe the pile of dishes will sit overnight.  But cooking and baking are two of my favorite ways to unwind, especially on a cold winter night when you feel lucky to be indoors, warm, and well-fed.  You have to find the things that engage you in this life--and then have the courage to pursue them without worrying about being perfect. 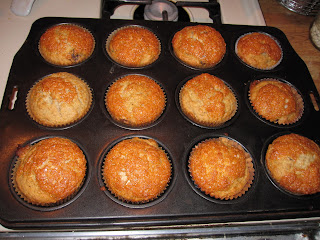 Photo: Coconut chocolate-chunk muffins (made with coconut and rye flours)

It's good to have a creative outlet where you aren't expecting to win anything, or make money off of your effort, or impress strangers (yes, I am sharing pictures of my cooking and baking online, but that's simply because I love looking at pictures of food and yes, I'm proud of what I make).  I almost always follow recipes so it's not like I'm coming up with all new dishes destined to win a cook-off.  I do slip in the odd substitution here and there, and by doing that I learn what flavors compliment each other and how I can work with a recipe when I don't have all the ingredients readily at hand. I was surprised when I heard from my mother that most of the family members in my generation on my father's side, Italian-American women and men living in a city where just a few blocks away there are stores carrying every imaginable ingredient, never learned to cook from their older relatives (or simply don't bother).  My great aunts and uncles, my grandparents--they all cooked amazing Italian fare everyday, but these days my cousins are more likely to order in Chinese or serve cold cuts at social gatherings.  I don't understand how they could grow up with such a bounty of home-cooked food always available to them and not want to replicate this for their own families.

Mike grew up with home cooked meals every night, but like most kids he also had a taste for junk food.  Recently, after he heard that Hostess (and the New England division, Drake's) was going bankrupt, he started searching the snack aisles of every convenience store, bodega (or as New Englander's curiously call them, Spa), and supermarket in Kendall Square trying to find his childhood favorite, Funny Bones, those chocolate-covered peanut butter and devil's food logs.

Growing up I wasn't allowed to eat Twinkies or Devil Dogs, though inexplicably my mother did allow me to have Hawaiian Punch and Chips Ahoy cookies, which are no paragons of health. For some reason it was anything Hostess-branded (including Wonder Bread) that was off-limits to me.  Of course she couldn't stop me from eating whatever was offered at the slumber parties hosted by laxer mothers, or at the convenience store five blocks away that my friend Heather and I would frequent, gripping our weekly allowance in our fists.

Thing is when I did have my first Hostess cupcake, I wasn't blown away.  In fact I was disappointed in the off-taste of the creamy filling, which I thought would taste more like the fresh whipped-cream my mother made.  The little frosted donuts and the coffee cakes were pretty good, but nothing special.  I far preferred my mother's homemade cookies.

Yesterday Mike found his Funny Bones at our local Shaw's.  Wanting to see if the coffee cakes were better than I remembered, and, more importantly, wanting to share in his nostalgia, I picked up a box.  I felt like a felon placing the artificial cakes in the cart.  I didn't want anyone to see them and say to the person next to them,"Wow, that couple isn't discriminating about what they eat, are they?"

When we got home and unloaded the groceries, I opened the box of coffee cakes and slid out a plastic-wrapped two-pack.  They were smaller than I remembered, but most things are when you're a grown up.  They tasted OK--sweet, but not cloyingly so, and moister than I was expecting (of course, they contain "stabilizing agents," whatever those are).  Mike savored his first Funny Bone, which he said was just as tasty as he remembered and a little taste of his childhood.

So when I told him that I was planning to bake brownies, he said, "What for, we have the Drake's cakes."

"I want to try this new recipe in Cook's Illustrated," I said.  "They've perfected the classic brownie.  Anyway, the Drake's will last for weeks and weeks. Isn't it Twinkies and cockroaches that can outlive us in a Nuclear attack?"  Maybe that's something else I like about making something from scratch--it's a delicious moment in time best enjoyed the moment it's served. 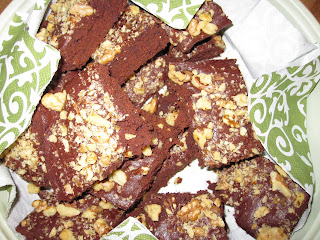