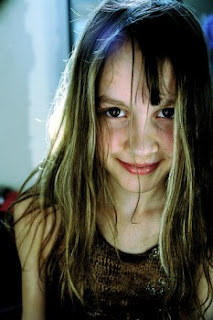 I went to visit my parents for Father's Day this past weekend.  On Saturday they had invited friends of theirs to come over for a BBQ.  I had heard quite a bit about my father's friend Michael and his wife Angela, and their two daughters, Ludovica, 16, and Martina, 8. How gentile and intelligent Michael was.  What a great cook Angela was.  How beautiful and sweet their older daughter was and what a spark plug their younger daughter could be.  Despite being an irrational reaction, I sometimes bristle at the sound of my parents heaping praise on someone else's children.  It must be leftover from my insecure teenage years where any mention of another young girl's good looks or disposition would have me sulking for days, thinking, why don't they say those things about me?  They wish that other kid was theirs.

But when my husband and I met Michael and his family, I could see that my parents were right.  Michael was quiet and thoughtful.  Angela spoke very good English for someone who came over from Italy when she was 41.  She kept apologizing that she couldn't help with serving or clearing because she had to keep her swollen, post-op foot elevated.

The older daughter, Ludovica, was lovely--tall and slim, with chestnut brown hair and the olive skin so many people try (and fail) to achieve with spray-on tans and Jergen's Natural Glow lotion.  She reminded me of the oldest daughter in the Von Trapp family--Louisa--from The Sound of Music--almost an adult, but still with a foothold in childhood, I am 16 going on 17, and all that. My husband later said, I didn't think a teenager existed who was so nice.  I kept looking for the chink in the armor and there wasn't any!

But the family member who I liked the most was quite different from the rest.  She was a chatty, attention-seeking, boastful little girl with strands of stringy, long hair that she would often chew at when she wasn't holding forth as master of ceremonies at my parents' party.

When I get older, I'm going to own an Canadian Eskimo Dog.

She said this with the authority that I might use when saying I refuse to argue with you anymore.

It turned out that a Canadian Eskimo Dog was just one of the many breeds she had listed on her Nook, under the assertive title "Dogs I'll Own."

Are you going to own ALL of those dogs, I asked.  NOOO, she replied, as if she couldn't believe I would even bother to ask such a silly question.  These were just options and more breeds would be added before she was satisfied.

I was flattered silly when Martina decided that out of all the guests that night, she liked me best.  She would follow me around, sit next to me on the couch, and ask me what I was doing and where I was going when I got up to use the bathroom.  I was pleased to be chosen, like she had picked me to be her partner on the school bus trip and share her watermelon Jolly Ranchers.

We watched funny animal videos on her Nook, and then she switched back to her electronic lists. Another of her lists was BFFs.  But there were no names, just the header.  I asked her if she didn't have at least one best friend (an absolute essential for girls if they wanted to get through the worst of their school years.  I always had a best friend, even in sixth grade when many of my other friends abandoned me in various tactless ways.) She said no, all the girls her age were pushy and snotty.  She stuck her hands on her hips and sashayed around with her nose pointing to the sky.  New Haven, CT is apparently home to all manner of rich and snotty fourth-graders.

But the idea that she didn't have a BFF didn't seem to phase Martina. She was the kind of kid who didn't hide the fact that she was teacher's pet--getting quarters for knowing things like which animal stalks its prey the fastest? (the mantis shrimp--who knew that, besides Martina?).  She liked American Girl dolls and was definitely girly, but also liberally used the words "poop" and "butt" in ways that suddenly made those words the funniest in the human language. She cracked me up.

They say that one of the reasons people have children is so they can relive their childhood through their kids.  But I don't think that inclination is strictly the province of parents.  I find that the kids that I like the best are the ones who encompass the same qualities that I did at their age.  Is this vanity? Egotism? Or is it a wish to still have those qualities that made us so confident and fearless once upon a time?

Martina wasn't a simulacrum of me as a child, but she was close.  The bright, flowery sundress, the way she talked like an adult yet made silly faces like a child.  Her matter-of-factness.  Her hamminess.  All of those were traits that I had at age 8, and that I still have, hidden away so deep behind layers of adult conformity and fear that I don't believe they'll see the light of day again.

But as much as I laughed at Martina's antics, she also exhausted me.  At one point when it seemed that I would be babysitting for the rest of the night instead of relaxing with my glass of Prosecco after a long week, I slipped upstairs and barricaded myself in my old bedroom, which my parents have changed into a study.  I worried that when I returned she would no longer look for me, that I would never be her BFF.  But I treasure my quiet moments to myself.  And she's not my daughter.


Posted by Jennifer Campaniolo at 3:13 PM No comments: