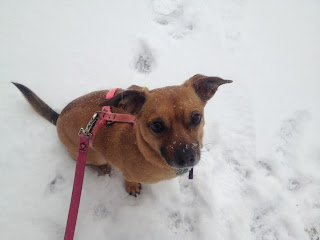 Carmelita sort of, kind of listening to me

I have a bad dog. I don't mean she's an aspiring Cujo. She's actually a very sweet pup. But she doesn't interact well with others, in particular the ones we'd most like her to be on her best behavior around--namely small children and other dogs.

It's all our fault, really.

You can tell a lot about a person by their dog's behavior. Carmelita speaks volumes about our inconsistency. Sure, we took her to the requisite Puppy Play and Learn classes at the MSPCA. But she spent a lot of time huddled under us on our plastic chairs, like a child sticking close to Mama on the first day of school.  Like that wary child, however, she eventually did join the other dogs in her size range for an extended game of tag. But when she was ready to go to the next level and we learned the multiple-week meeting was on a weeknight in Jamaica Plain, we balked. At the time we figured, she'll get socialized at the dog park. No problem. After all, we had spent $75 to get her a Green Dog license, a yearly program you pay into if you want your dog to be admitted to Brookline's exclusive dog parks.

My husband took her once. She was a bit intimidated by the bigger dogs, which meant she was loudly obnoxious, "talking trash like Kevin Garnett," as my husband likes to put it. Her usual approach when she feels threatened.

But then I was at my in-laws, where I got the chance to catch up on the latest Reader's Digest, the right-wing's answer to my beloved New Yorker. I noticed an article listing veterinarian's advice that "you won't hear at your pet's next exam."  Why they're keeping secrets from their patients, most of whom love their pets so much that they're willing to wipe their dog's little behind with baby wipes after they do their business (oh, is that only me? Awkward...), well I can't say. But one of the advisories was about the dog park. The vet maintained he would not bring his own dog to one because he had seen too many dogs come into his practice with various injuries, some serious.

I imagined Carmelita having to wear a little eye patch because some neighborhood toughie--likely a Husky, I've known at least one that was a total jerk--took her eye out for sassing him. If Brookline had a small dog park I think it would be OK, but as far as I know they don't. They just throw them all together and hope for the best--like public high school, but with claws and teeth.

Kids in our neighborhood have said under their breath, "There goes the BAD dog." And I wince, like I'm escorting a delinquent. The problem with training Carmelita was I didn't want to cap her enthusiasm.  She gets so excited about romping around outside. She loves rolling in grass; no matter how often she does it I always laugh. I admire and envy her unabashed joy.  I don't want a dog that just walks next to me with a blase look on its snout. I want a dog that shows me what it is to live in the moment without fear of being admonished.

Of course, people will say it's actually kinder to discipline the dog--that they look for leadership and authority in their owner. If you don't teach your dog to listen, you could end up with a nippy, high-strung pup who doesn't want to be out of your sight. When our cousins watched Carm for the weekend, they remarked afterward "she's a needy dog."

My consolation was that she didn't pee on their furniture or on them. Much.

Posted by Jennifer Campaniolo at 9:46 AM No comments:

Tired of displaying the same holiday decorations year after year? Looking for some new ideas? Own a glue gun or have a dollar store near you? Then forget Martha Stewart--for new seasonal accents go straight to Pinterest, the social media site that allows users to create and share "pinboards" of visuals under categories ranging from the popular New Recipes to the more obscure Felt Creations.

Pinterest goes beyond the traditional (and prissy) ideas we're used to from Ms. Stewart. The visual media site offers ideas from the sublime to the silly to the what the F%&k?.

Take an upcoming holiday as an example. Easter is on March 31. You could decorate with ho-hum peace lilies and PAAS egg coloring kits. Or you can spend an afternoon (or three) creating a wreath using Marshmallow Peeps Yellow Chicks!

Why eat Peeps when you can make them part of your home decor?

If you were planning to shop at Target or Walmart for new Easter decorations, you might consider a stop at a local thrift store or antiques shop instead. There you might find the sorts of hare-raising vintage tchotchkes that at one time drove children to tears when they went to grandma's house. These kitschy chicks and bunnies are all the rage with some Pinterest followers. 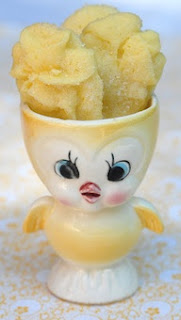 This poor chick has had the top of its head removed

Speaking of eggs in egg cups, another popular craft project on Pinterest are handmade egg cup cozies. Make one or a dozen--you never know when you're going to need egg cup cozies to keep your guests soft-boiled eggs warm and snuggly! 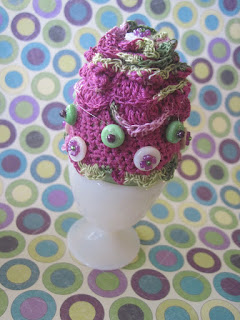 This is the Carmen Miranda egg cozy

If you don't have time to crochet, you can still get ideas from the Pinterest crowd--like this project, a Sweet Bath Pouf Chick. All you need is a yellow bath pouf, orange craft foam, scissors, and that hot glue gun and you have yourself, well, something vaguely related to the Christian holiday that celebrates the resurrection of the Lord Jesus Christ. 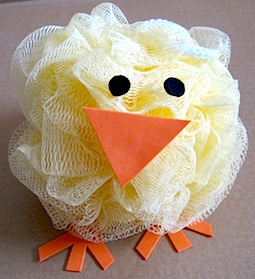 Quack Quack
Posted by Jennifer Campaniolo at 8:49 AM No comments: