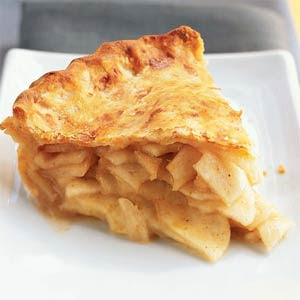 "We must surrender our hopes and expectations, as well as our fears, and march directly into disappointment, work with disappointment, go into it, and make it our way of life, which is a very hard thing to do. Disappointment is a good sign of basic intelligence. It cannot be compared to anything else: it is so sharp, precise, obvious, and direct. If we can open, then we suddenly begin to see that our expectations are irrelevant compared with the reality of the situations we are facing. This automatically brings a feeling of disappointment.

Disappointment is the best chariot to use on the path of the Dharma."--Chogyam Trungpa, Cutting Through Spiritual Materialism, included in The Buddha is Still Teaching: Contemporary Buddhist Wisdom, selected and edited by Jack Kornfield.

It's getting to that time of year, when the air carries a chill, the sun has packed up at 5PM, and a persistent desire rises up in me: to finally make a pie crust.

Pies are a staple in my husband's family. At my mother-in-law Teena's house, it's a ritual to have apple pie and pumpkin pie at both Thanksgiving and Christmas. She also makes Tourtiere, a savory French-Canadian meat pie made with pork and beef and served with cranberry sauce. The weekend before the big feed, Teena and my niece Meagan whip up about a dozen pie crusts, then wrap them in plastic and put them in the refrigerator to chill. Later my mother-in-law will fill them and bake them until the tops come out a warm cinnamon color.

I have always been secretly envious of women who excel in the domestic arts. I say secretly because my generation was one of the first to benefit from equal rights and my ambition in school was to be a writer and editor working in a city and eating out most nights. But I also wanted to be married, sew frilly skirts, and make pie. I liked the trappings of my mother's generation, but without the boredom and repression.

Marrying a full-time job with a flair in the kitchen didn't seem to be out-of-reach for me. I had never learned to sew because it's hard to teach a left-handed child to do anything involving a sharp object, but I had spent all of my childhood watching my mother bake. She was a stay-at-home mom until I was 11, and it was important to her that I have the kind of mother she didn't have--someone who baked cookies in the afternoons, read to me every night, and sewed cotton, hippie-style blouses that made me a fashion plate in the late 1970's.

The first few times I saw my mother-in-law make pie, I was inspired. My husband warned that making pie crust was "a black art" but I would not be deterred. I bought myself a beautiful red ceramic pie dish from Williams-Sonoma that I brought to my in-law's house and showed off to everyone. My mother-in-law had the same set of tin pie plates from thirty years ago, judging from their residual scratches, dents, and scorch marks.

She started by making a crust herself so I could see all the steps and get a sense for what I'd be doing. Unlike me, who always uses a recipe, she was able to eye the ingredients and intuit the measurements like a seasoned detective scanning a crime scene. Her movements were fluid, her hands strong, especially when she vigorously rolled out the dough on a dish towel.

"Don't handle the crust too much because it will break apart," she said. I didn't think much of this comment at the time.

When it was my turn, I moved slowly, hesitant. I must have been lulled into a state of oblivion when she was demonstrating the steps, because I couldn't remember any of them. I asked her question after question, a pesky fly buzzing around her as she tried to start the next pie crust. She had been a professor so she was used to remaining patient with remedial students like me.

When it came time to roll out the dough, I poured a mountain of flour on my surface and started to shape my crust. I could never seem to get an even, circular shape--my crust looked more like an amoeba. I lifted the dough into my hands and mashed it together into its original lump to try again. Then I remembered what she said about not handling the dough too much. I felt like I was a contestant on Jeopardy, competing against a Harvard student and stuck with a faulty buzzer. More flour, than slap! the dough was down for the count and I was rolling against the clock. ZZZZZ! Time's up.

My mother-in-law was kind, mentioning something about how her first pie crust was a disaster (I doubted it) while she stepped in to repair the damage my over-zealous pounding and rolling had caused. There were scraps of dough under my fingertips, flour in my hair, and disappointment in my heart.

The following pie season I was back in my mother-in-law's kitchen. This time we were joined by my 14-year-old niece. While grandmother and granddaughter rolled out beautiful crusts which they delicately draped in the pie tins, I was trying to peel off the pieces of dough stuck on my rolling pin. I didn't want my teenage niece to see me cry. Too late.

My cousin Mikki, who also makes pies around the holidays, reassured me that she used pre-made Pillsbury pie crusts from the supermarket.

"No one knows the difference so why knock yourself out?" she said. But it was more than a matter of saving time. I felt like I had set out to prove I was a capable woman, able to make the dough at work and at home, and I had failed. My beautiful ceramic pie dish gathered dust in the kitchen cabinet.

Now that it's coming on pie season again, maybe I'll give it another try--third time being the charm and all. But if it doesn't come out right this time, I know where I can get a ready-made version. No one but my mother-in-law will know the difference.
Posted by Jennifer Campaniolo at 2:45 PM

I sympathize, Jen. I have baked many things, but I have never made a pie crust from scratch and I have no doubt that it is a hard-earned skill. You should definitely keep trying even if disappointment keeps showing its little head. Good luck.

I have made scratch crust a hundred years ago when I felt I had something to prove.

Now I don't care so much as long as someone else in the family crowd is young enough so they feel they have to prove something.

Prove to yourself that you are a capable woman (although the rest of us already know that), make the pie crust... and then revert to Pillsbury (actually Orchard Farms is better).