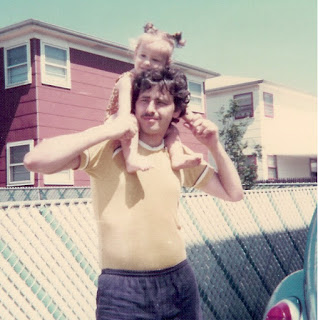 Me with my first Valentine, my dad


I like Valentine's Day. I don't care about the naysayers, the scoffers, the "let's-stick-it-to-Valentine's-Day-by-reading-our-essays-about-bad-breakups" people. Hey, not everyone gets to be feted on other made-up holidays, like Mother's Day or Secretary's Day, but I'm not complaining about that.

Valentine's Day has all the elements I favor: pink, flowers, chocolate, fancy restaurant meals, champagne, "presents for pretty girls," as Lucy Van Pelt would say. Too bad Schroeder was too young to be interested in girls.

Sure, I have had some lonely Valentine's Days, especially as a teenager. On Valentine's Day in my high school you could buy carnations to give to your girlfriend/boyfriend or to your best friend. Pink carnations were for friendship and red were for love. That moment when they're giving out flowers at the front of the room was always one of mixed emotions for me. I was fairly certain I would get one from my best friend, Donna, who always had a boyfriend and thought that sending me a carnation signed "Your Secret Admirer" would cheer me up and assure I wouldn't leave the classroom dejected and empty-handed. As sweet at she was to do that, it only made me feel pitiable. But despite my frizzy hair and flat chest and general gawkiness, I also held out a small but unspoken hope that I would get a red carnation from someone I was crushing on.

In my Junior year I got a pink carnation from a guy who I had suspected had a crush on me. He was a shy and quiet towheaded boy whose pale hair and skin seemed to erase him from sight. If I had been smart I would have sent him a carnation, too, thereby assuring myself a date to Prom. But I was holding out for sparks, and there was only weak static between this boy and me.

My elementary school years were much more successful. I remember writing on the backs of dozens of diecuts of Pepe Le Pew and Bugs Bunny to give to my cadre of girlfriends and to any boys I had my eye on. At that age I was outgoing and full of myself, and I hadn't yet mastered the art of subtlety (I would in fact not learn that lesson until much, much later in life.) Most little boys were more interested in the Dukes of Hazzard poster I was giving away from the latest issue of Dynamite! magazine than in receiving valentines from girls.

I remember one Valentine I got in second or third grade. It was a piece of notebook paper, folded over into the shape of one half of a heart, and hastily scribbled red. On the front in black crayon someone had wrote "Hey Cutie" and inside "?" It was the most intriguing Valentine I had ever received. Who thought I was cute? Who was "?" I kept that Valentine hidden away (I didn't want my parents to see it and think I was having sex). I still have it and the mystery remains unsolved. I had my eye on a few suspects: there were two Tonys in my class (I went to school in New Jersey so most of my classmates were Anthony or Dominic or Joey) and unlike the other boys they both liked to flirt with girls.

I had a brief relationship with one of the Tonys--a relationship that lasted from the time he picked me as his partner to sit next to on the bus going on a field trip (that morning my mother had braided my hair and pinned both braids to the top of my head so I looked like a dairy maid in a yogurt commercial--he thought I looked like Princess Leia) to the time when we got off the bus and he started holding hands with another girl.

The other Tony had thick golden blond hair like Ricky Schroeder and used to make semi-obscene comments to me about the Vienna Sausages his mother had packed for his lunch. I didn't understand what he was talking about, but I had enough feminine intuition to suspect he liked me.

Now that I'm married I have a guaranteed Valentine's date for as long as we're together (which I hope is a lifetime). Still, I kind of miss the suspense of wondering who will be my Valentine this year. Who will surprise me this time with a flower or a crudely-folded paper heart?

Posted by Jennifer Campaniolo at 12:31 PM No comments: