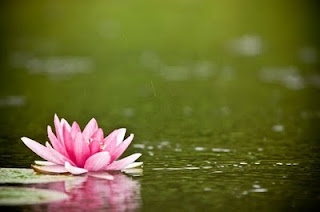 "The way we know things depends upon the mind, nothing more. Most of us have moments of deep contentment when we don’t feel a need to alter, express, run from, or invest some special meaning in our experience in any way. Deep contentment shows us that, at least momentarily, our habit of cherishing and protecting ourselves from what we call “other” has subsided. In moments like these, we have stopped objectifying things. We can let things be. And when the mind rests at ease in this way, it accommodates everything, like space." - Elizabeth Mattis-Namgyel, The Power of an Open Question

If there was a caption running over my head, something that others could see but I could not (and let's face it, there are many things we can't see about ourselves that others can perceive without fail), my caption would be "Not enough."

I once read a book called Enough. In it, the author talks about how we are bombarded with everything from information we want to absorb, to advertising tempting us to buy more, to multiple choices at the supermarket where there is always a fresh product claiming to be new and improved. When I was younger and used to read Self magazine (a woman's mag whose title says it all) I would write a list of all the products they recommended for women like me--volumizing shampoo to make my "fine" hair as puffy as a an eighties soap opera star; spot cream to minimize the sun spot on my left cheek that an Origins saleswoman was "kind" enough to point out to me; even cellulite cream to reduce the unsightly fat cells that had appeared on my legs after I gained a few pounds in my thirties.

I still make lists, and they tend to take up multiple sheets of paper. I'm not just making lists of products, but of restaurants I want to try, books I notice while reading Publishers Weekly, vacations I want to take, websites I want to bookmark so I can visit them later. My head is often filled to distraction and once one thing is crossed off the list, I'm off to the races, on to the next item. There is very little time for contentment at what I've acquired or achieved or completed. Never enough.

A person could live their whole life this way, but that would be a sad existence. And I'm not saying that we shouldn't jot down a good idea or an interesting web address or a product we'd like to try, even if we know it will probably have the same effect as the last product we tried, which is not much. Maybe this shampoo will smell really good, and that will be enough.

The problem for me (and for the people around me whose lives I directly impact) is that I find I'm very often discontent. And I know I'm not alone in this. Take a perfectly nice day, walking around looking up at the trees changing color (early this year for New England), smelling the pizza being served up at a neighborhood restaurant, seeing people laughing among themselves, and all I'm thinking is what's not right about the situation. Like those puzzles that ask you to find inconsistencies between two pictures, I notice what's wrong--I'm sweating a little in my new trench coat (why did I decide to wear this in September when I know the weather is fickle?) I stumble over the pavement and almost fall down (why can't I walk straight, why am I so clumsy?) I miss the train (that driver saw me and yet he still pulled away. Why does he hate me?)

And there goes another lovely fall day in my wacky world.

Increasingly I agree with the writers and psychologists and spiritual leaders who say that contentment is the most rewarding feeling we can hope for, better than just some abstract goal like "happiness." To paraphrase a quote I read in O magazine (which I read despite the fact that her notion that "we're beautiful as we are, but here are pages and pages of my favorite things that you should buy, which, by the way, cost more than you make in a month) "What if instead of trying so hard to change, I embraced all my (insert first name)-ness?" Instead of worrying about what strangers think about the non-thickness of my hair, it's enough that the people who love me don't give a fig.

We're enough. This crowded train I'm on is enough because, despite the fact that it's crowded and a conductor just asked me to type "more quietly," it's taking me to see a good friend of mine. I'm not hanging off a bus filled with people trying to find somewhere--anywhere--to sit. I have a window seat and a table for my computer. That's enough. My spending budget for the weekend would not impress The Real Housewives of wherever, but it's more than enough. (Anyway, there's nothing real about anyone on "reality TV" as I'm reminded when reading a book I recently picked up, Reality Bites Back: The Troubling Truth About Guilty Pleasure TV)

Our life as it is is enough. What we wouldn't do to have just this life back if we found ourselves homeless, hungry, sick, or dying. I was at a funeral for my husband's uncle last weekend. He was 90 and in poor health, so it wasn't a shock--though any family member or friend's death, whether expected or not--always shocks anyway.

Uncle Ken was a quiet man--in the almost ten years I've known Mike I don't recall ever hearing a word out of him. But in fact he had many passions in life--he had a deep love of nature for one--and he had survived heavy warfare in North Africa and Italy in WWII. I suspect that, though quiet, he was a man who felt that on many levels he had enough in life.

I would think that people like that die without too many regrets about what they didn't have enough of.

Posted by Jennifer Campaniolo at 2:21 PM

> a conductor just asked me to
> type "more quietly,"

Ryan: "Are you angry at your computer?"
Natalie: "I type with purpose".

Meant to respond to this earlier...wonderful post. So very honest and to the point. Thanks.