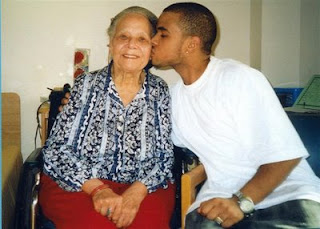 "When we are training in the art of peace, we are not given any promises that because of our noble intentions everything will be okay. In fact, there are no promises of fruition at all."--Pema Chodron

Tonight I meet Linda, a 63-year old woman who lives alone in the same town as me. She's my match from Springwell, a service that matches up volunteers with seniors in need. It took them months to get back to me and I have to admit I'm a little puzzled. My mother is going to be 60 in January and I don't consider her OLD. My mother-in-law is in her early 70's, but she has more energy than I do (for example, she helped my husband carry a heavy bureau up four flights of stairs because I couldn't handle it.) Also, the woman has a job. I was expecting my friendly visits to be paid to a long-retired woman in her 80's or 90's. Why doesn't this woman have anyone to talk to? Is she socially awkward, the term we're using for a parenting book about right-brained children (ie: geeky kids who are good at math)? Is she crazy and therefore can't make (or keep) friends? Has she ever been married? Any kids? If so, surely they must visit her.

Of course, all this pondering proves is that I have entered into this volunteer project with an agenda. I expect my lady to be OLD, wizened, wise, so we'll make up the female version of Mitch Albom and Morrie. I expect her to be feeble but full of memories and life advice that I'll eventually record and make into a weepy bestseller. Instead of focusing on the deed itself, I'm looking at what's in it for ME.

I'm ashamed to admit that I had a similar agenda the last time I volunteered with the elderly. Actually, it was worse because I was partially there to meet guys. I was in my mid-twenties, single again, and trying to meet that special someone through volunteering. Of course, many other single New York women had the same idea, whereas the guys were not to be found.

I did end up meeting a young, cute Dominican who worked as an aide at the long-term care facility. I was volunteering there with a woman named Millie who had lost both of her legs when she was hit by a bus when she was 90. I remember when I first encountered her. The hospital was putting on a dance, playing old records from another era. Millie was in a wheelchair, but beamed when I shimmied her chair left and right in time to the music. After the dance was over she invited me to come to her room to sort through her mail. I got a little information about her life: she had never married or had children, she was a former teacher, she had traveled the world. I started visiting her regularly and that's when I met Manny.

Manny and I would take Millie out and wheel her to the park. We didn't know she was aware of our flirting but the next time I came to visit her she pointedly told me "Manny isn't here." I felt embarrassed by how transparent I really was.

The last time I saw Millie, she was cranky. When I came to her room, she ignored me for ten minutes as she chatted on the phone to her nephew, whom she insisted was going to take her away from "this place." I wheeled Millie down to the auditorium to watch a movie. It was summer and there was no air conditioning in the room so I started sweating. A woman in front of me in a wheelchair kept rolling her chair back and running over my toes. Later, I took Millie for a ride around the hospital garden. That's when her niece came by. When she saw me and I explained what I was doing there, she called me a mensch and proposed that we set up a schedule of my visits so we wouldn't overlap in the future. Reader, after that day, I never went back. My parents thought I should be spending more time with another senior citizen in my life, my grandmother. But really it was that I didn't want to be held to a schedule. I didn't want to be counted on. Oh, and not surprisingly, Manny and I never went beyond a surprisingly dull dinner date. I guess I got what I deserved.

This time, I want to go in without expectations. I want to be helpful no matter what her age or social abilities. Obviously she is in need of a social visit; otherwise, why would she sign up? I can't go into this expecting that if I do good, I will be rewarded. I need to just do it. It's a good time to make amends to Millie by sticking this one out for a while.
Posted by Jennifer Campaniolo at 2:15 PM