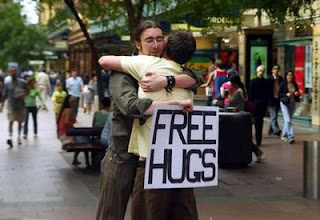 "We think that by protecting ourselves from suffering we are being kind to ourselves. The truth is, we only become more fearful, more hardened, and more alienated. We experience ourselves as being separate from the whole. This separateness becomes like a prison for us, a prison that restricts us to our personal hopes and fears and to caring only for the people nearest to us."--Pema Chodron

One recent day I practiced saying "hello" to people I passed on the street in my town. It's always awkward for me to pass strangers on the street--like on the "T," I don't know where to look. I inevitably cast my eyes downward or pretend that there's something fascinating going on at the house across the way. When I said "hello" my voice sounded strange, too soft, and I wondered if I didn't just imagine I'd said something. I didn't get many "hellos" back, so maybe I wasn't getting my message across. It would seem inappropriate to bellow my "hello." I was worried that people would think I was insane or from the midwest. We all walk around like robots, only becoming human to our friends and family. I wanted to connect with my neighbors, even if it was just by saying "hello."

My first stab at being friendly to strangers extended into my commute into Boston. I said hello to a homeless guy and bought him an orange juice and gave him a dollar so he wouldn't think I was judging him too much. I said hello to a young boy, and I'm afraid I might have scared him. I forgot that you're not supposed to say hello to strange kids because they might think you're a kidnapper.

This "hello" experiment only lasted one day. The next day I was back to walking fast, hands in my pockets, eyes cast downward or away. It was a tough thing to keep up.

I envy those people who occasionally show up in public places, offering free hugs. How do they deal with all the people who pass them by or laugh, rejecting their hugs, their attempt to bring more love into the world? We're such a cynical culture (and we Gen-X types especially) that someone offering free hugs seems either ridiculous, dangerous, or laughable.

As I've said before, I work in a city with lots of college students. One morning I noticed one of these hug solicitors standing outside of Berklee College of Music. Usually there are clumps of young musicians taking over the sidewalk in front of the school in all sorts of weather, smoking and laughing. I don't love walking through this throng because I hate crowds and I'm kind of scared of these students in particular. But this time I stopped in front of the hugger--an African-American music student of considerable girth but possessing a sweet face--and gave him a hug. It was not as weird as I thought it would be, and I had a smile on my face all the way to work.
Posted by Jennifer Campaniolo at 10:25 AM

I love that you hugged the hugger! Good for you...