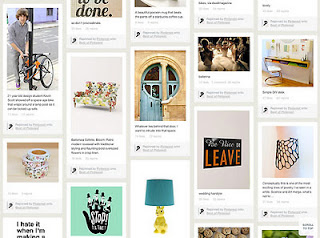 
"A great many women view shopping as a form of recreation.  The 'thrill of the hunt,' the acknowledged excitement of shopping, tugs you into a powerful magnetic field, designed to cloud your judgment and extract your money.  You need to pass up those wild rides on the consumer merry-go-round and instead use a different vehicle to satisfy your basic needs for stimulation, activity, attachment, affiliation, and self-expression."--April Lane Benson, PhD, To Buy or Not to Buy: Why We Overshop and How to Stop

"Our goal is to connect everyone in the world through the 'things' they find interesting. We think that a favorite book, toy, or recipe can reveal a common link between two people. With millions of new pins added every week, Pinterest is connecting people all over the world based on shared tastes and interests."--Pinterest mission statement


I login and press the down arrow.  The pictures render achingly slow.  I avoid looking at the screen because I don't want to spoil the surprises in store.  The OCD part of my brain says, I must start where I left off, I don't want to miss even one!  When I hit the bottom of the page, I feel an unease in my stomach that comes from knowing there are more posts that came before these, and that I've missed out on them, maybe forever.  What if there was a knock-out dress or some yummy recipe using pumpkin seeds or a book shelf cleverly mounted on the outside of a door?  It's the same feeling that I imagine Twitter users feel when they try to read every tweet they missed in that 1/2 hour window when they were away from their computers.

But then the fluttery anticipation, the kind I get when walking into a Lord & Taylor with a 20%- coupon-off-already-marked-down-wear-now-merchandise or, to phrase it a different way, what a junkie experiences on his way to scoring some Horse from his dealer (I've watched a lot of episodes of Intervention).

If it's not an addiction I have, then it's at least lust.  I would say love, but the object of my desire is for the perfect high-heeled Mary Janes, the beautiful bathroom with soaking tub and lots of windows,  an artistically-wrapped present, or the most luscious cupcake recipe.

I'm pinned by Pinterest.  In McDonald's-speak, I'm a Heavy User.

A colleague introduced me to Pinterest as a way to promote a new imprint our company is launching.  When the two of us and the Marketing Assistant sat in Red Mango that day, I had a hard time understanding the concept behind this new social media site.  I was also having a hard time hearing her over the weirdly-inappropriate club music the yogurt chain was blaring.  Later, I dismissed it as dumb, but knew I should at least check it out for publicity purposes.

I dabble in social media primarily for work and for the occasional reunion with an old friend or to talk about books I'm reading.  But I can always walk away without any difficulty, like turning off an episode of I Survived that I've already seen.  When I started using Pinterest, I had trouble understanding what I was supposed to do and how I was supposed to find and get followers, or even what the point was of "pinning" pictures on virtual bulletin boards.  It didn't take long for me to catch on, though.  While ostensibly using Pinterest for work, I was also sucked into it on a personal level.

Before Pinterest, I used to come home from work and never turn on my computer, having stared long and hard at a screen all day, and now just wanted to rest my eyes, move around--even if it was to go from the kitchen table to the couch to my bed.  Now I'm coming home and logging on to see what cool DIY project one of the people I follow has discovered.  Two hours pass before I realize just how much of my free time I have (squandered?) pinning pictures of celebrity haircuts to my STYLE board.

Pinterest is essentially like making wish lists using pictures.  And there's nothing I like better than making lists.  And it's not just me--lots of people like lists.  It's why copywriters and magazine editors love using bullet points and sidebars and favor titles like "The 7 Ways to a Flatter Stomach" or whatever.  To me, Pinterest is also a throwback to when I was a teenager and used to tear out pictures from magazines and tape them, collage-like, on my bedroom wall.

There are some advantages to being a regular pinner.  I am following all of my authors who are on Pinterest and repinning their pins.  I am also getting that retail high, the thrill of the hunt that usually leads me astray on shopping sites like Rue La La.  Pinning new skirts from Anthropologie and a hot holiday shade of OPI nail polish keeps me from actually shopping, but provides almost the same kick.

Buddhists would call my current obsession another form of samsara or "being hooked" to earthly desires.  Although finding the occasional deal on a Kate Spade handbag brings me pleasure, there are times I find myself wandering alone around the Prudential Center in Boston, looking for something to lift me up from some mild but persistent malaise.  I won't feel right, I reason, unless I buy SOMETHING, even if it's as small as a tube of lipstick.  Mindless shopping--without a purpose other than to cheer me up or to give me a false sense of power--inevitably leads to disappointment and less money in the bank, not to mention owning up to my husband that I have spent beyond our agreed budget for the week.

With Pinterest I can be creative and express my personal style in a way that won't cause arguments or lead to an accumulation of barely-used lipsticks.  I like seeing other peoples' pins as much or more than I like pinning my own finds.  I try to maintain a few non-materialistic boards, like "Mindful", which is populated with nice quotes and sublime imagery from nature.

Now if I could get myself to actually DO some of the projects I've pinned to my DIY IDEAS board like that pretty flower necklace, or bake those pumpkin pie cupcakes on my RECIPES TO TRY board, this would take Pinterest from a relatively harmless diversion to a life-enhancing technology, which after all is what social media is supposed to be about.

Posted by Jennifer Campaniolo at 4:47 PM

Thanks, Jen! Wittily and wisely written -- I enjoyed hearing about this site, even if I'm terribly afraid to get involved in looking at it myself, haha -- for fear of getting obsessed, that is :). Always look forward to your posts about contemporary life and its foibles!