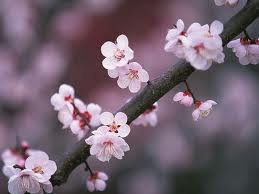 violets here and there
in the ruins
of my burnt house

I heard on the radio the other day that Tokyo Governor Shintaro Ishihara has asked that the people of Tokyo show self-restraint during their popular spring ritual Cherry Blossom Season. Granted with the devastating earthquake and Tsunami less than a month ago and another quake hitting the Northern Coast today, celebrating budding flowers might seem ridiculous. Ishihara is also responding to the need to conserve energy ("On an average year, we light up the Chidorigafuchi area so that visitors can enjoy the evening too. But we have to conserve energy this year, so we have refrained from doing so. The atmosphere is different from an average year," he was quoted as saying in an article on Channel NewsAsia.)

This makes perfect sense--I remember those weeks and months after September 11 when most New Yorkers were unusually subdued. It would be a while before it felt appropriate to be anything but grim after experiencing such a large-scale and public tragedy.

That October I hosted a wine-tasting party and I remember what a relief it was to be among friends, opening bottles and serving Brie en Croute and hummus. I lived in Hoboken, NJ then and had seen the towers burning from a pier just blocks from my apartment. My roommate and I were lucky we didn't make it to work in Manhattan that day. We both cried when we saw the people jumping from the Towers.

I don't know how to make sense of random suffering. After 9/11 happened, I personally couldn't shake a terrifying vulnerability. I thought of the dead who were my age (28) or younger, how they were just going to work on an average Tuesday, summer over but the weather still beautiful. I had only been inside the towers a couple of times, but I remember eating at Windows on the World with a boyfriend, the slight vertigo I felt sitting so close to a view of the sky and not much else. What happened to these victims could have easily happened to me or to anyone I loved. It may sound silly, but I don't think I really considered my own mortality until that Autumn.

So what was my response? I developed hypochondria, I worried that I had left the apartment door unlocked or a burner on. I would call home even though there was no one there. We still had an answering machine, and I figured if the apartment had burned down, the machine wouldn't work. But even when I heard our taped message click on, I still fretted. If something so devastating could happen to other good, ordinary people at any time and for no reason, then when would my turn come? My parents? My friends?

My mother, who experienced personal tragedy early in life, has always been a big believer in appreciating beauty, savoring small moments, lingering on the slightest glimpse of joy. Sometimes she wonders aloud how she came to have such a worrier for a daughter. I thought I was just being realistic--after all, the world is a dangerous place where anything could (and did) happen. By ignoring that fact, I thought of my mother as having her head in the sand. It hasn't been until recently that I've started to see how her way of experiencing the world is actually a lot more sensible than mine.

I don't think it's disrespectful for the Japanese people to stop and appreciate the cherry blossoms, drink wine, celebrate spring with friends if they are able. It is in these ways (I say, admittedly from a Westerner's perspective) that we are honoring our humanity and, perhaps more important, ensuring our sanity.

Posted by Jennifer Campaniolo at 1:44 PM

Thank you for the reminder. Sometimes it is the small things or even the almost mundane things of ordinary life that keep us going in the face of trial or tragedy. I recall seeing even in the tent cities in Haiti after the quake people totally displaced and without any comforts, trying to make life as "normal" as possible.

If we can remember to look for the extraordinary in our ordinary lives perhaps tragedy will seem less frightening. Thanks again...