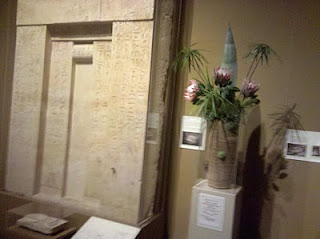 Throughout the museum (with the majority in the second floor galleries) were 50 flower arrangements made by local garden clubs and florists. What distinguished them from mere wedding bouquets was that each arrangement was inspired by a particular piece of art on the wall. I'm not sure how they made their selections, but I admired the artistry of the flowers and started looking at flower arranging in a new way.

I used to regard flower arranging as something bored housewives and retirees "studied" in Adult Ed class. Flowers are beautiful and smell pleasant but they are not art. Art you can hang on the wall or install in a gallery. Flowers last a few days if your lucky before they drop their petals everywhere. Perhaps artists like Christo are an exception; I was in New York City when he and Jeanne Claude did The Gates in Central Park. I'd say it was a waste of orange fabric.

There's a new book coming out this fall called Ikebana Style: 20 Portable Flower Arrangements Perfect for Gift Giving and I've seen some color spreads. Ikebana is the Japanese art of flower arranging. Here is an example from the book: 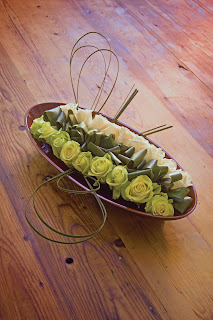 The author, Keiko Kubo, blends her Eastern style (simple, asymmetrical, designed to be viewed from the front and the side) with a Western aesthetic (a variety of types of flowers, potted to be transportable, can be viewed from all sides.) A student of the fine arts, Kubo considers her three-dimensional arrangements to be sculptures.

I understood this once I saw the flowers on display, each influenced by their muse--an art nouveau poster by Toulouse L'Autrec, a portrait of a 12 year-old girl that her parents would use to find her a proper suitor ("like Match.com for the 18th Century," my husband quipped.) Flowers bent gracefully at the stem like gentlemen, or stuck straight up in the air like stubborn cowlicks. Care was taken not only to capture color, but nuances of form and mood. One arrangement looked like a rooster that was emerging from the center, its fire-red crest flowing. Sure enough, next to the arrangement was a still life with fowl. 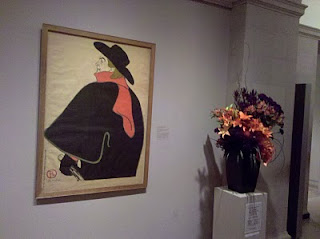 The names of the flowers were a novelty. Flame of the Forest, Kangaroo Paw, Pincushion, Angel Wing Begonia...the names were as evocative as the displays! Yes, I knew about gerbera daisies and roses. Once a week I buy a bouquet from my local Shaw's. But that's just because they're cheap--unique flowers with unusual names are harder to come by and therefore not available at any old regional grocery chain. 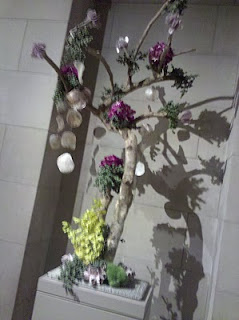 I admired the patience it must have taken to assemble these delicate beauties, employing floral foam as a sturdy base, with wired picks and tubes to keep the stems intact, the flowers hydrated. Knowing that I was witnessing something delicate and ephemeral, I attempted to capture each arrangement and it's accompanying art work with my cell phone camera. Many other people were doing the same thing and at times lines began to form for a chance to snap a close-up. Someone (usually me) found themselves standing impatiently behind some pair of older ladies in hats and loafers who had endless, encyclopedic knowledge of every arrangement.

I took so many pictures that for a time I didn't even stop to look at the flowers. Instead I went right up and viewed them through a viewfinder. It took me a while to realize what I was doing. I was at the exhibit, but I wasn't really paying attention. It was like the time Mike dressed up as a blind man for a Halloween party. He needed pictures afterward to see what people wore, ate, and drank. Though he had been standing there the whole time, he had missed the party. By trying to collect images to bring home with me, I was missing the real thing right in front of me.

Flowers are often used as a symbol of our impermanence. Think of the cherry blossoms in Washington, DC, the alpine flowers on the top of Mt. Washington, the annuals your neighbors plant in their front yard. Flower arranging is like building a sand castle or decorating a cake or drawing on the sidewalk with chalk. Why do we do it? Someone will invariably come along and kick the castle, cut the cake into gooey pieces, or train a hose on the sidewalk.

But oh how nice it was when it was finished, when it was admired by strangers, enjoyed by dinner guests, cherished by honeymooners carving a heart in the sand with a piece of driftwood, then watching the tide rake the sand clean. 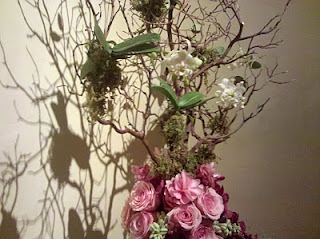 Posted by Jennifer Campaniolo at 2:11 PM

Flowers delivery to denmark said...
This comment has been removed by a blog administrator.
July 8, 2010 at 1:38 AM