Where ignorance is bliss, 'tis folly to be wise? 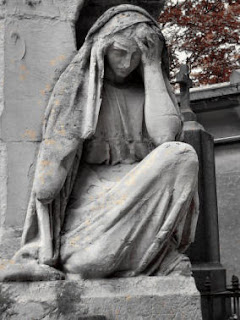 "People complain that Buddhism is an extremely gloomy religion because it emphasizes suffering and misery. Usually religions speak of beauty, song, ecstasy, bliss. But according to Buddha, we must begin by seeing the experience of life as it is. We must see the truth of suffering, the reality of dissatisfaction. We cannot ignore it and attempt to examine only the glorious, pleasurable aspects of life. All sects and schools of Buddhism agree that we must begin by facing the reality of our living situations. We cannot begin by dreaming."--Chogyam Trungpa, from The Pocket Chogyam Trungpa

"Definitely lose the forest for a tree, a branch, bark, a leaf, whatever your pathetic little mechanism can handle, because it certainly can't handle the whole show. Reason, of all things, is the enemy. An excess of sense is senseless. Take refuge instead in the cupcake, the sugary sop morsel that gets you through. The digestible piece and no more."--Norah Vincent, from Voluntary Madness

Remember the scene in Annie Hall when Alvy Singer, played by Woody Allen, approaches a young and attractive couple on the street and has the following dialogue with them:

Is happiness just self-delusion? Or is depression the product of dwelling too much on your own suffering (or the suffering of others?) Is it possible to think too much, to wallow in the world's sorrows? Or is it better to face facts than to stay blissfully ignorant?

In other words, does happiness occur only when we purposely ignore the realities of the world we live in and the personal hurts we've suffered and our eventual mortality?

Despite my tendency toward depression (particularly in winter), I find myself compulsively reading every negative story in the newspaper (and in the Boston Metro section, in particular, there's plenty of those.) It's like this need to know the worst that can happen, that DOES happen everyday. A fire that started in one apartment spreads throughout the building, leaving eight families homeless and with nothing but the clothes on their back. A drunk mother driving her kids and their friends home from dance class crashes her SUV, killing everyone inside. A girl is leaving her homecoming dance when she is lured by a group of her "friends" and then assaulted and gang-raped, with no one coming to her rescue for at least an hour. I could go on and on, but you get the idea. Each time I read a story like this, first I put myself in their place and wonder, could I handle that? Could I survive that and still find cause to be happy? Then I imagine the feelings of the people involved, and wonder, where are they now? How are they doing? I want follow-up stories, reasons to feel hopeful that the human spirit can endure almost any calamity caused by nature or by your classmate, next-door neighbor, even someone in your own family.

I feel incredibly lucky that I have not had to endure the kind of poverty that drove thousands of New Orleans residents out of their city after Katrina or that keeps a family in poor health because they can't afford health insurance or even good produce. Looking at pictures of the aftermath of the hurricane in Haiti, I wonder, good lord, haven't those people had enough misery (as if misery were a glass that was in danger of overflowing.) How can they possibly be happy again after suffering such relentless tragedy? They won't have money to go to a good therapist to heal their post-traumatic stress or to rebuild their home--replacing the pots and pans and everything else that they lost. They won't even have the money to give their children with the hope that the next generation of their family will have a better future.

Will the Haitian people affected by this natural disaster just try to put it out of their mind, the way the Hutus and the Tutsis did when they moved next door to each other after suffering unspeakable violence at the hands of the other? Will they survive because they choose not to dwell on the harm done to them and instead move forward with optimism? I read somewhere that resilience is a muscle that needs to be used or it (we) become too soft, too complacent in our comfortable lives. Kind of like I was in my 20's, before 9/11 happened just across the river from me.

Obviously a Buddhist wouldn't advise anyone to focus only on life's suffering. If that were the case, Buddhists would merely be a bunch of Sicilian widows. Obviously it is possible to see and accept reality--even when it's wretched--and still manage to be happy. This blogger posted a poem Edward Espe Brown shared with her that just might be my answer.
Posted by Jennifer Campaniolo at 10:00 AM

You can get a good dose of dukkha, impermanence and non-attachment in Christianity as well:

'Abide with me; fast falls the eventide;
The darkness deepens; Lord with me abide.
When other helpers fail and comforts flee,
Help of the helpless, O abide with me.

Swift to its close ebbs out life’s little day;
Earth’s joys grow dim; its glories pass away;
Change and decay in all around I see;
O Thou who changest not, abide with me.'

You can get a good dose of dukkha, impermanence and non-attachment in Christianity as well:

'Abide with me; fast falls the eventide;
The darkness deepens; Lord with me abide.
When other helpers fail and comforts flee,
Help of the helpless, O abide with me.

Swift to its close ebbs out life’s little day;
Earth’s joys grow dim; its glories pass away;
Change and decay in all around I see;
O Thou who changest not, abide with me.'