A minor post that's not really relevant to this blog 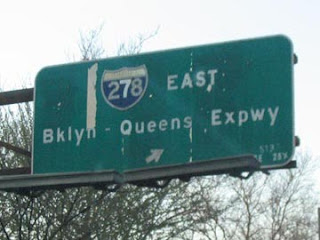 A couple of weekends ago Mike and I drove down from Boston to Staten Island, where my mother's best friend was having a 60th birthday party. Not being familiar with the geography of the borough, we brought along my father-in-law's GPS. Dad had warned us that five minutes into using the thing, we would be yelling at it. I thought he was exaggerating, but he was right--we were barely turning onto the highway when Mike started questioning the disembodied female voice on the GPS (let's call her Sheila.) I was excited about Sheila because, unlike my mother, I'm a lousy navigator. I don't drive very often (I've only lived in places with good public transit, so I never needed to) so I haven't honed the skill of going from point A to point B while avoiding point C because of the traffic. I also have no idea how to fold a road map. I just want to squash it into a ball and throw it in the backseat.

With the confidence that can only come from being smarter than us humans, Sheila started us on a different route to NYC than we usually take. She told us to go up the west side of Manhattan instead of taking the BQE. Mike, who had been questioning Sheila's judgment for most of the ride, suddenly exclaimed, "She's taking us through Bayonne! She's brilliant! We'll bypass the BQE!" For those not familiar with the Brooklyn-Queens Expressway, it's notoriously jammed. It doesn't matter if it's 5PM or 2AM, you're going to be stuck looking out at the grittiest parts of the city--the graffiti-covered exteriors of abandoned warehouses (which have more than likely been converted into million dollar condos), the smokestacks of highly-toxic chemical factories--not to mention about a billion billboards advertising Bud Light using the silhouette of a curvaceous woman superimposed with the phallic shape of a beer bottle. Subtle, ad men, very subtle.

We don't exactly "fly" through the west side, but at least the view is better. That's another reason I don't drive--I like those moments when the ugliest parts of Queens give way to the sparkling skyline of Manhattan. That, and I like to nap in the car. You start off in Brookline and before you know it, you're in Tampa. And with Sheila safely guiding us to our destination, I didn't have to pretend to squint at a map, trying to find the exit.

Sheila also kept track of when Mike was speeding. Every time he went over 35 miles an hour, she would warn, "Caution." I heard "caution" so many times that I thought we would soon be heading off a cliff. It pleased me that there was ANOTHER woman in Mike's life to nag him, that I was the good guy in this situation--my eyes closed and my head resting innocently on the LL Bean travel pillow.

But Sheila was not taking us through Bayonne after all. Instead we ended up on the BQE anyway. More yelling at Sheila. What was she doing to us? We had put our complete faith and trust in her and she was taking us on a wild goose chase through the five boroughs.

Eventually we did find Staten Island. The catering hall was called "Memory Lane" and it was next door to the Staten Island Alzheimer's Foundation, which we thought was some person's idea of a sick joke until the host told us they were connected. I was proud of the fact that we beat our parents to the party--our parents who were coming from Ocean, NJ, a mere stone's throw away. When they did finally arrive we had polished off our salads and had already been to the buffet line.

Turns out they got lost.

We may be acquiring our own Sheila soon. She's a little annoying at times, but no matter how confused we are, she'll get us where we need to go.
Posted by Jennifer Campaniolo at 2:49 PM

I used to yell at my car's voice. She would say "your door is ajar." Then the car GPS would make comments about my driving but rarely said caution. As my car is aging (not so graciously), I miss conversing with my old friends.

And I'm with you--I'll let my husband drive. All I do is close my eyes and I'm there :)

Was just in a car yesterday with a friend and was commenting on her GPS in which she told me her name. It was not nearly as nice as Sheila:)

Love your blog, I wish I had more time to read it today! Need to catch up...

Have a great weekend,
Mandy