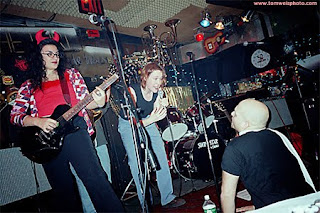 Bionic Finger
Photo credit: Tom Weiss
"Our life's work is to use what we have been given to wake up. If there were two people who were exactly the same--same body, same speech, same mind, same mother, same father, same house, same food, everything the same--one of them could use what he has to wake up and the other could use it to become more resentful, bitter, and sour. It doesn't matter what you're given, whether it's physical deformity or enormous wealth or poverty, life in the middle of a madhouse or life in the middle of a peaceful, silent desert. Whatever you're given can wake you up or put you to sleep. That's the challenge of now: what are you going to do with what you have already--your body, your speech, your mind?"--Pema Chodron, from Awakening Loving-Kindness

A friend and I were talking about life choices, and whether or not we believed that everyone had something they were good at, that they could make their life's work. I agreed, my friend wasn't so sure. The first thought that came to mind was, I knew from a young age that I wanted to work with books. But then I thought, yes, and you also wanted to be a writer. And everyday that goes by that I don't write, that I spend cleaning or playing with the kitten, or most often, reading another new book, is another day that I haven't used doing something that brings me the most joy.

Why do we constantly put off what we can do today for what we think we'll do tomorrow? Why do we so often choose to avoid what could make us more fulfilled? For me its easy--fear of failure. If I'm working with an author, supporting their book and sharing it with others, I'm OK, I'm safe. It's not my "baby" out there being passed around and judged, but someone else's. When one book is marginally successful while another book is an instant hit, it reminds me that there are lots of good writers out there, writers who are good enough to get PUBLISHED, but only a precious few that people have even heard of, much less read. How can I compete in such a vast arena of talent? What if I put all my heart and soul into something, and then no one wants it?

Working in publishing for 13 years, and seeing the realities of what it takes to be successful (talent, but also timing, luck, and/or a great editor) has discouraged me, but I've also discouraged myself, time after time, from at least TRYING. If I try pole vaulting, I'm fairly certain I will be bad at it; if I take up tennis, I'm pretty sure I'll miss more balls than I hit; if I were to go for an MBA, I know I would fail out and that's perfectly OK with me because that's not where my interest and passion lies. But if I were to write a book or even a short piece and never get it published (or even read, except by family members) then I worry I'll be crushed.

Fear. It keeps coming back to that word. For Halloween this year, my cousin is throwing a big party where everyone has been told to dress as their worst fear. I don't know what other guests are thinking, but my first reaction is not conjuring up Dracula, the Headless Horseman, Damien, zombies, or the Blob (though that movie terrified me as a kid--it looked so much like my favorite Cherry Jello turned menace.) I think of getting old and wrinkly and soft, or pushing a shopping cart around while people pass me by without more than a glance, or being hunched over a walker like an old woman who didn't drink enough milk as a kid. I think of loneliness, of rejection, of being laughed at, of not being good enough. I think of rejection letters, lots and lots of rejection letters. Maybe I should go as a rejection letter, just some short form an editorial assistant printed out by the reamful and stuffed in an envelope.

But then I think of my friend who is so smart and so clever and so unique, but who doesn't really believe it. So many people are like that. It makes me happy that after a long hiatus raising me and working, my mother is painting again. She tells me, Oh but I have to take a class to get motivated. So what, I think, at least you're doing it. A friend who years ago failed to get into business school was recently downsized from her job at a big name firm and took the opportunity to apply again. This time she got in to a great school and is really enjoying her classes. Another friend works a regular day job to pay the bills, but uses his free time to write and teach witchcraft. He's had two books published and is now earning $100 per student for his email class (and that's in a down economy!) One of my oldest friends was in a band for 10+ years. They were pretty successful around the local New York music scene (which to me is really admirable considering how competitive it is in NYC clubs.) She dived right into her passion. I always thought (and still do) that that made her one of the bravest people I know.

What are you afraid of that's keeping you from discovering your life's work? What fear is driving you to distract yourself with less important tasks? What are you good at, and if you're not doing it, why not?
Posted by Jennifer Campaniolo at 4:09 AM

It's funny. I don't get down about rejection letters. I have a whole pile of them. But I think knowing what I do about publishing, which is less than you probably, but more than most out there, has also created a block for me. Fear of failure lurks, but also fear of futility. Writing tons and tons of stuff that no one, for whatever reason, will accept.

Hi Jennifer - I can relate to the fear you speak of, having lived with some form of fear all my life. It has so many faces: anxiety, anger, control, depression, comparison to others, etc. I have found that it's not only helpful to find out what we fear, but also what's underneath the fear - what's behind the mask of the "me" that is fearful... And where does the mind go when it is not in the present moment, that is feeding the fear... As in fear of what will happen in the future *if* we actually live our passion...:) Ah yes, I know these little tricks that fear likes to play :) Sometimes fear and I have to have sit and have a heart to heart so she doesn't fly off the handle and spin out of control... If I may be so presumptuous as to recommend a couple of books that were helpful to me...that you might find helpful as well... One is called The Mandala of Being, Discovering the Power of Awareness by Richard Moss. And the other is the Diamond in Your Pocket by Gangaji. They both spoke very deeply to me and gave me good insight.

I was going to say that if I had to dress up in my worse fear I would have to go to a party where I was the only person there -- fear of loneliness.
Or maybe a walking coffin - fear of death.
But I think I am probably more affected by the fear of loneliness though I'm working at getting through it.

Loved your Pema quote. Read Fear and Fearlessness in July. Her words are salve.