The Loneliness of the Internet User 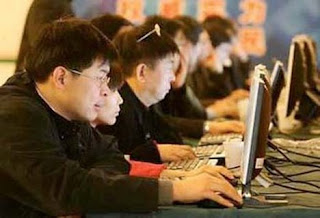 "Self-absorption in all its forms kills empathy, let alone compassion. When we focus on ourselves, our world contracts as our problems and preoccupations loom large. But when we focus on others, our world expands. Our own problems drift to the periphery of the mind and so seem smaller, and we increase our capacity for connection--or compassionate action."--Daniel Goleman, from Social Intelligence

As someone who likes to write, I go back and forth about whether I should write about myself and my personal experiences, or stop navel-gazing and write about other people. Write what you know versus be creative. Great writers (and actors and other artistic types) are empathetic enough that they can write about someone else's experiences and make it sound completely authentic. They get inside their characters' minds. I'd like to to be able to do that. Problem is, I often feel like I don't really KNOW what other people are thinking or experiencing. I've lost some of my ability to pick up on subtle clues--non-verbal signs that tell you what the other person is feeling. So instead I turn inward, and write about what's going on there. And I'm worried that it's a slippery-slope leading to self-absorption. And one of the things I'm working on here is to become a more compassionate person. So I find my goals and my reality are at odds.

I think the problem lies in a lack of close personal connections. For this, I partly blame the internet.

Much of this blog is about finding a way to connect--to my neighbors, to old friends, to my family, even to strangers (maybe even especially strangers, since I don't know a lot of people in Boston yet.) I have a love/hate relationship with technology because on the one hand it allows us to do so much that we couldn't do even five years ago (maybe I'd heard of blogging back then, but it took me a long time to catch up!) On the other hand, I feel like it's also isolating. Mike and I talked about this the other night--how we have so many ways to reach out to people--social networks, texting, email. But we have less really close friends. And this is not an original idea I'm having--there was a study done that said people in 1985 had more close friends living in their community than they do presently. Back in 1985, I was in junior high school, and though I'd never want to go through THAT again, I did have many good friends who I saw everyday. Now I'm lucky to see my friends once a month.

Yesterday I signed up on Facebook for the first time--ostensibly for work, but I was also curious about it on a personal level. I looked up my old classmates from the two high schools I attended. At first it was really interesting to see pictures of people I had grown up with. Many posed with husbands and children. Some had moved away, but most had stayed in New Jersey, where I'm from. I was disappointed that some of the people I had lost touch with weren't on Facebook, so I wouldn't get the chance to reconnect with them. I wondered what I would say to people I "friended." Would we just trade facts about our lives--the best and most shiny bits--or would we actually become real friends? It seems like the former is most likely.

My point is, I much prefer to meet people in person and actually interact with them. It's too easy to hide behind an avatar. Technology might have brought us some fun and innovative ways to communicate, and I do like blogging and getting comments from some really wonderful people whom I wouldn't have had the chance to meet otherwise. But I can't help feeling that the internet is killing the way things used to be, when you knew your neighbors and people came together to help each other, and you met people face to face. If we don't know the people around us, and just know old and new friends by pictures on MySpace or as a curvaceous avatar on Second Life, will that kill our compassion for the live, flesh and blood people all around us? I live in a major American city, and I have access to lots of ways to socialize on the Net. So why do I feel so alienated sometimes?

I wonder how others feel about this...
Posted by Jennifer Campaniolo at 2:51 PM

Jennifer, I've actually blogged about this, myself (oh, the irony!). Feeling cut off and isolated, at the beginning of the year, I pledged that I would meet one new person each month-at a minimum. And, it had to be a social setting. With the exception of one friend from high school (whom I caught up with, via facebook), I've managed to keep that pledge. It's nice, but it doesn't solve the daily dilemma of the isolation of much of adult American life.

I volunteer-that is the most standard answer, right? I am on a committee that is responsible for an emergancy homeless shelter for families. Once a month, we go and feed and just hang out with whomever needs us. And, as fate would have it, for the last 3 months, when its been my committees turn, there have been no clients. So, no place specific for me to go and hang out. Go figure.

Wish I had a better answer. Or any answer. If you find yourself in NJ or in NYC, we could meet for a cup of tea.

First, thanks very much for your kind comments and encouraging words about writing--or not writing. I take those to heart. And I'm sure I've been making assumptions about the publishing world. (Sorry!)

Re: your post, I feel so much of what you're expressing. The pros and cons of technology are something I think of often--both for myself and as the mother of an adolescent child. All three of th people in our house spend too much time on the Internet, in my opinion. I have kind of a spiritual commitment to being as aware as I can of the line between the benefits and the damaging extremes. So for me it's a matter of keeping close watch on my motives. Am I using my blog to escape, or as a creative, life-affirming activity? I can usually tell the difference if I pay attention.

Finally, I also have struggled with whether to write about myself or not. As you've seen, I do write about myself. I've chosen to hang on to "write what you know" because I do know it best. One reason I feel okay about this is that I know how much I appreciate when other bloggers share their own stories and insights. It really makes me feel the world is smaller and I have more in common with people than not.

It's true that connecting via the Internet isn't the same as connecting in person. I've found, though, that I feel more confident and often happier in my "real" relationships for having the enriching experience of connecting with interesting and vital people around the world.

I share your thoughts and conflicted feelings about technology's impact on society. Things have changed so fast that it's sometimes confusing to know how to handle it all. I don't have a cell phone, i pod, or any other portable - and find it challenging when in person conversations are interrupted (sometimes several times) by these things. They aren't good or bad in and of themselves, but the tools seems to have arrived before the skills to handle them in a healthy way.